TDP (Thermal Design Power) ratings have been introduced by CPU manufacturers in order to specify how much heat a particular processor will emit, so that customers can select an appropriate heatsink. In response, heatsink manufacturers have started to specify how much TDP their coolers support. As simple and fool-proof as this may sound, there are several severe problems that have made this seemingly straightforward process of selecting a cooler with a TDP rating that matches the TDP rating of your CPU more and more confusing.

First of all, the TDP ratings published by Intel and AMD have become increasingly misleading over the years. Nowadays, it is not uncommon to see so called “95W” or “105W” CPUs producing a heat-output of 150W or more. In the past, pushing CPUs beyond their specified TDP often required manual tuning by the user (overclocking), but nowadays, many CPUs go way beyond their specified TDP ratings automatically, using their turbo modes. These turbo settings are often enhanced even further by many enthusiast motherboards, which do not enforce the recommended power limits from Intel and AMD by default, unless they are manually limited by the user. Considering all this, selecting a heatsink that only supports the specified TDP of the CPU can be problematic and result in lower-than-expected system performance. As a result, the TDP specifications given by CPU manufacturers can no longer serve as a simple guideline in cooler selection.

This is just the tip of the iceberg though. The second key problem is that the amount of heat that a cooler can dissipate can vary greatly from CPU to CPU. For example, the same cooler may be able to dissipate 250W on CPU A but only 150W on CPU B. In particular, CPUs with smaller chips (DIEs) and smaller integrated heat-spreaders (IHS) are much more difficult to cool than larger ones that emit the same amount of heat. In addition to these differences that are due to different heat flux densities, other aspects such as internal DIE configuration and placement on the processor package, as well as the maximum allowed temperature of the processors, also lead to significant variations from model to model. Assigning a general TDP rating to a CPU cooler can therefore end up being misleading as well.

Thirdly, maximum heat dissipation capacity is by no means the only aspect of a heatsink’s thermal performance and perhaps not even the most important one: The thermal performance of heatpipe-based CPU coolers doesn’t scale linearly, so even if cooler A might be able to dissipate up to 350W and cooler B only 300W, it could still be the case that they perform the same at lower heat levels such as 150W, which may be much more relevant for the customer. Max. TDP ratings therefore cannot tell the full story about heatsink performance. This is particularly important for CPUs with high heat flux densities or other internal limitations that cannot be pushed beyond relatively low power levels no matter how much heat the cooler would be able to dissipate. For example, if a CPU cannot go beyond 120W due to internal limitations, cooling performance at 120W will be much more important for the customer than if the cooler could theoretically dissipate 300 or 350W.

Noctua’s Standardised Performance Rating (NSPR) is a platform-independent classification system that allows customers to assess and compare the efficiency of Noctua CPU coolers at a glance: The higher the NSPR score, the better the heatsink’s performance. For example, high-end coolers such as the NH-D15 will reach a NSPR score of more than 150 whereas compact low-profile coolers will score below 50. Mid-range models such as the NH-U12S will fall somewhere in between:

Using a simple formula, tightly controlled thermal efficiency and dissipation capacity measurements are combined to establish a single numerical rating that is both straightforward and highly indicative of real-world performance.

All measurements that form the basis for the NSPR are conducted inside a thermal chamber at a stable ambient temperature of 22°C and tightly controlled environmental parameters. Using a custom-built heating element, which is powered by a laboratory power supply, allows precisely regulating the heat input. All measurements are taken using high-grade thermocouples and repeated three times in order to guarantee that there are no significant deviations. The measurement tolerance for each reading is below 0.05°C. 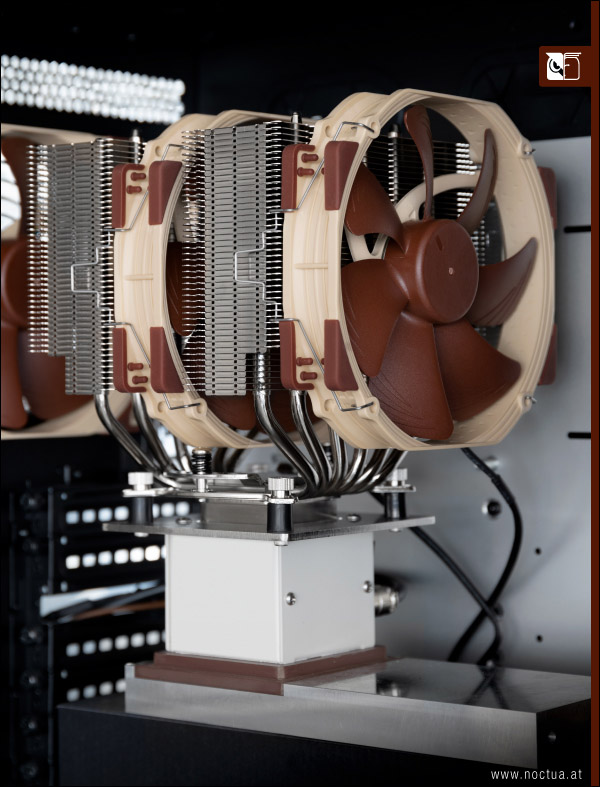 The first basis for the NSPR is a measurement of thermal efficiency at a fixed heat-load that is chosen according to the performance class of the heatsink, e.g. compact low-profile or passive coolers are tested at 120W whereas high-end tower coolers are tested at 250W. The temperature of the heating element is measured after having reached a stable level for 15 minutes. To make the results comparable between different heat-loads and performance classes, the heat-load in Watt is divided by the delta temperature (temperature difference between heating element and ambient temperature).

The second basis for the NSPR is a measurement of dissipation capacity that reflects a cooler’s ability to sustain high heat-loads. For this test, the heat-load is increased until a temperature of 60°C is reached and kept stable for 15 minutes.

The results of both tests are then combined and balanced by multiplying the first result by ten and dividing the heat-load of the second test by ten:

By combining a measurement at a typical heat-load with a second measurement that tests the heatsinks maximum dissipation capacity, the NSPR offers a more balanced picture of heatsink performance than standard TDP ratings because it reflects both performance in standard use cases and under extreme conditions. Conducted at a stable ambient temperature of 22°C and with clearly specified, realistic parameters (typical heat-loads in the first test, target temperature of 60°C in the second test), it also avoids the pitfall of going into testing scenarios that are remote from real world applications. At the same time, like with any single-number rating, there is no way around the fact that NSPR is a simplification of the complex nature of heatsink performance. In particular, it cannot reflect the fact that cooling performance can differ between platforms, CPU series’ and even from CPU model to CPU model within a series. This is where our CPU-specific classification scheme of heatsink performance steps in.